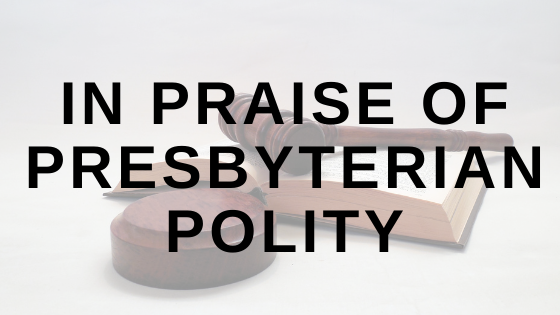 The key for getting folks to click on your blog post seems to be finding a sensational, evocative, or controversial-sounding title. I suspect “In Praise of Presbyterian Polity” checks precisely none of those boxes. But this post is, a little bit, about avoiding sensationalizing, so maybe it fits.

As a millennial pastor in a declining mainline denomination, I have often found myself apologizing for our polity everywhere I go. It’s so slooooow. Everything has to go to a committee, even changing a light bulb it seems, ha ha ha.

Even the professor who taught my Presbyterian polity class in seminary seemed to take this posture: he decided to spend half the course on leadership theory in attempts to be “more relevant,” even though the class was called Presbyterian Polity. I remember next to nothing from his lectures on leadership theory, but I’ve run into a whole lot of things in day-to-day ministry addressed in the Book of Order that I sure wish in hindsight he’d spent a little more time explaining to us.

On a recent walk with Brittany she had actually asked me a question about Presbyterian polity (not a regular topic of conversation in our marriage, I assure you), and as I described to her words that seemed to belong to other centuries: synod, diaconate, I found myself marveling at how almost comically out of place they all seemed. I sometimes feel like I’m spitting up on friends who are my age when I tell them I’m a P r esby t e rian, as if I’ve just stained their trendy H&M shirt with some ancient and unwanted-forgotten-for-a-reason word vomit. In an age ruled by immediately Googled answers and on demand Pinterest recipes and YouTube how-to videos for a quick troubleshoot to any problem, the Presbyterian insistence on process does feel increasingly out of place. I confess I’ve lifted an envious eye more than once to trendy megachurches that move with great expediency because they just go do stuff, rather than sending it all through a process.

As our conversation continued and I listed more archaic words, I found myself reflecting aloud to Brittany, “I’m not sure Presbyterian polity is going to be able to last in this century.” Then I was surprised by the next words that came out of my mouth: “but I think we might need it to.”

I feel that even more acutely after watching the chaos of this election cycle… and the past week’s events.

Don’t misunderstand me here. First of all, I have plenty that I dislike about Presbyterian polity. I live in it, and I run up against its shortcomings all the time. It’s a far cry from perfect. My three-year ordination process, for example, usually felt like it fit better with the structure of higher-ed from the 1960s, but not the new millennium, and that it was more about setting up red tape and hoops for me to jump through and making sure I had to do everything older pastors had had to do, than it was about equipping or evaluating me for ministry (or preparing the church for having me in ministry). Secondly, I’m not saying Presbyterian polity will save the world (now there’s a catchier blog title). But. Maybe we need it more than we think.

Some years ago, David Brooks wrote a column about our increasing impatience with process in American political life. We want to get our way, we want to fully get our way, and we want to get our way right now. As such, we elect and idealize leaders who promise not to back down or take no for an answer, thinking we can shortcut the process. And… surprise surprise! We find gridlock when the other party is doing the exact same thing in their own caucuses and ballots, resulting in an inability to collaborate or compromise, to do the true nature of politics: work together for the common good. On the church side of things we follow pastors like celebrities, deifying and idealizing the ones whose star catapults them overnight as their church swells rapidly in attendance under the force of their captivating vision and charismatic persona. Presbyterianism is remarkably unsexy compared with that.

And yet, maybe we shouldn’t be so quick to eschew the slowness that process demands for the quick results personality offers to us. Maybe something that impresses upon us slowing down and deliberating with others over even some of the smaller decisions is needed more than ever in our fast-paced, immediate answer world.

We live in an age that where it is easier than ever to make our opinion known to the masses, and that tempts us into thinking we should then always make it known, our individuality of prime importance. As CKPC’s founding pastor John Haberlin is quick to point out: the ruling body of our church is called the Session because it only has its full given authority when it is in Session. Together. Individual elders in our church may have recognized authority within our congregation through their influence or natural leadership, but their full constitutional authority comes only when they are all together. Discussing, dialoguing, listening, praying, voting. No single personality gets to steer it if everyone understands their role properly (though many personalities have of course tried to in the history of Presbyterian churches).

Oftentimes you’ll hear people say: “I want to steer clear of church politics.” And I one-hundred percent understand what they mean and agree. They’re saying, I think: “I want to stay away from drama and gossip and posturing.” We all do, pastors get pulled into that kind of thing all the time, and it’s soul-sucking. But as I spent some of this morning on the phone with Peggy Iversen, our nominating committee elder and chair, I found myself even a little excited by church politics, in a different sense of the word. As we talked about all the work she has set before her (thanks Peggy!), I realized: this is going to take a while. Why? Because our polity is one that is designed to involve a lot of people. It reflects our tradition’s theological commitment to the “priesthood of all believers,” that the people called to do the ministry of the church aren’t just the ones in the pulpits, but the whole church, praying and working together to discern where God is calling us to go. That’s a church politics I want to be involved in.

Our polity is not gospel. It’s time-tested, but it’s not Holy Scripture. It needs more than a few tweaks and reforms (and is actually designed for that). My dad used to say he was a Christian with a capital “C,” and a presbyterian with a lower case “p.” Our polity not perfect, but maybe some of the things about it that cause us to recoil should lead us to reflect just as much on our own shortcomings (like impatience with process) and the problems of our cultural moment as much as we reflect on what we’d change about the Book of Order.

Maybe our polity can’t survive in this brave (and fearful) new (and chaotic) world, but maybe we need it to.