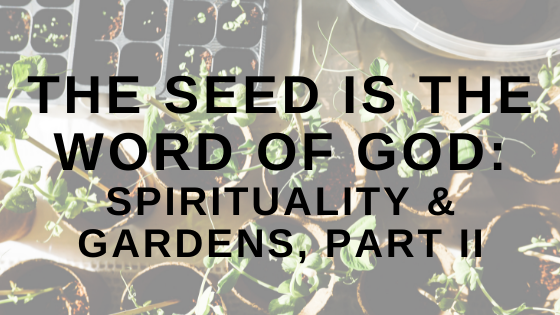 In a series of blog posts, several of us will be exploring the question of why a community garden makes good sense for a church, and I’ll be leading us off with a series of three posts looking at what I’m calling the “spiritual theology of gardening.” You can see yesterday’s post here. In today’s post, I want to explore how a community garden can grow us spiritually as individuals and as a community.

The Seed is the Word of God

I’ve mentioned a fair bit recently in various settings that I believe the Christian faith today is in danger of lapsing toward one of the first heresies it combated: Gnosticism. Gnosticism separates the physical from the spiritual and places priority on the spiritual, so that the physical (our hunger, sexual desire, exercise, etc.) is either (a) Evil and to be avoided and/or suppressed, or it is (b) Inconsequential, so do with it what you will (licentiousness, drunkenness, debauchery, etc.). Gnosticism wants to move everything out of the physical realm and into the “spiritual” or, intellectual realm. As I’ve said on many occasions now, we are especially tempted by Gnosticism after this pandemic, to privatize our spirituality and think that listening to a sermon podcast on our Wednesday jog is the same thing as church. It moves spirituality largely into our heads and away from the bodies and body of fellow believers. But I actually think that this temptation to Gnosticism has existed for a while in the Western church.

The theologian Norman Wirzba writes that our technological and information age has “reduced our ability to truly know the world… The medium that increased our access to knowledge… at the same time decreases our grasp of the world’s significance… the irony [is] that today we have more information about how the natural world functions than ever before, yet also are guilty of its most widespread destruction. Should not the effect of our knowing lead to understanding, appreciation, affection, and care?” [1]

When we think of monastic living, we sometimes are under the impression that all monks and nuns do is sit around in seclusion praying, singing, and studying the Bible. But that is a grave misunderstanding of their vocation. For almost two millennia monks and nuns have farmed, brewed beer, made wine, run orphanages and soup kitchens not as an appendage to their important work of praying, singing and reading the Bible but, I would argue, as part of an integrated and holistic spirituality that is not limited to the intellectual or so-called spiritual realm only, but to all of God’s creation. Especially the spirituality of the physical. Gnosticism seeks to separate our prayer from our work and from creation itself, and there is a reason the church roundly condemned this as anti-Christian. As Leah Kostamo puts it “the incarnation shows God’s commitment to creation—the Creator becomes the created in the ultimate act of solidarity.”[2]

Christian spirituality is never removed from work and creation, even if it might have moments it detaches from it, it is inherently tied to “the dust of the earth.”

We often look at the book of Genesis and God’s command there to humanity to till the land, work the soil and we extend that command out to all forms of work, and it certainly isn’t inaccurate to broaden the language by making it more metaphorical. The schoolteacher, for example, tills the land and works the soil of young minds so that they will flourish. But for the first hearers of scripture, those commands to till the land and work the soil were probably understood literally more often than not because a good most of them… were farmers who actually spent their days tilling the land and working the soil.

I doubt we consider eating to be a genuinely religious activity… [but] the vast majority of cultures and individuals who have preceded us on the planet, up until the last three generations perhaps, have been intensely aware that getting food from field to table is the most important religious act we perform. Every day, taking our sustenance from the earth and from the bodies of other animals, we enter deeply into the mystery of creation. Eating is practical theology, or it should be; daily it gives us the opportunity to honor God with our bodies. Our never-failing hunger is a steady reminder to acknowledge God as the Giver of every good gift. When we ask our heavenly Father for an egg, we do not get a scorpion (Luke 11:12).[3]

Jesus, on the night he was betrayed, gave his disciples a meal. He did it as part of a meal that was over a thousand years old already (Passover). God is known, and our fellow bearers of God’s image are known by sitting at a table, taking the bread, taking the cup, eating, drinking as an act of memory, of faith, of hope, of love. A community garden and the food God produces in it and through it can grow us spiritually as individuals and as a community as we work the land, till the soil and marvel at the mystery by which God brings forth sustaining and nourishing life. But like all Christian spirituality, this is never for our own edification, at least not exclusively. It is so that we can go out and labor for the Kingdom of God in the world, which starts with our own community. And that will be the subject of the third and final post in this series.