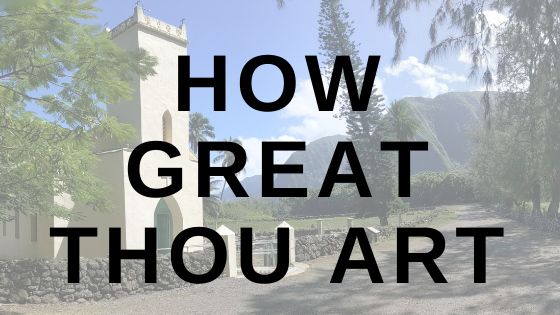 Last week Brittany and I worshipped in a leper colony.

Well, sort of. Many of you are probably aware that we were very fortunate to spend the last week-and-a-half in Hawaii, time together that was restorative and for which we are very thankful. We spent a few nights on the island of Molokai which is probably best known as the location of a leper colony that operated for about 100 years as a response to the rampant spread of the then-misunderstood Hansen’s Disease. Children and parents, husbands and wives were torn apart in heart-rending fashion in forced quarantines to this colony which was segregated from contact with the outside world. Joseph De Veuster—more famously known as Father Damien—was a Catholic priest who chose to serve there. Father Damien dug upwards of five graves daily and hand-built over 2,000 coffins in order to ensure the banished and forgotten citizens of the colony would have dignified deaths.

Despite counsel to the contrary, Father Damien did not distance himself from his infected parishioners; he believed in the importance of human touch and contact, and because of this “irresponsible behavior” he eventually contracted the disease which would lead to his death at the age of 49. After discovering he had the disease, he began his sermon that Sunday with two simple words: “We lepers.” That is to say, “I’ve always been here with and in this with you… and now I am one of you.” We.

Last Tuesday Brittany and I toured this colony (the only way you’re allowed to see it is if you are part of a tour) and came to the church built by Father Damien, the very church where he delivered that sermon. No doubt it pales in comparison to the great cathedrals of this world in splendor, and yet the sacred and secular are commingled inseparably in that space. The colony and church sit on a small, lone peninsula at the base of towering, verdant sea cliffs—the tallest in the world, in fact—lifting one’s eyes upward, simultaneously evoking wonder at their beauty and the beauty of their Creator, while also serving as a daunting and sobering reminder of the isolating prison walls they functioned as to keep people in. Inside the church the walls were adorned with the Stations of the Cross depicting a suffering Jesus with whom the lepers could no doubt identify and yet who also has the power to “change the leper’s spots.” In the floor of the church Father Damien had opened holes to function as spittoons because in the advanced stages of leprosy it is difficult to control excessive drooling.

The tour itself wasn’t anything special. Our tour guide had some unconventional (to put it mildly) views of the world and a keen interest in conspiracy theories that he seemed more interested in talking about than Father Damien or the history of the leper colony. There were just six of us on the tour and everyone was friendly enough, but on the whole everyone seemed to keep to themselves as passive participants with no real connection to one another.

But then we sat in the simple sanctuary of Father Damien’s church with spittoons and the Stations of the Cross. And our tour guide, not knowing any of our religious backgrounds said, “If it’s alright, I’m feeling led to sing.” And with the muffled roar of ocean waves in the background he began:

O Lord my God, when I in awesome wonder

Consider all the worlds thy hands have made

And then an older gentleman sitting behind us softly joined in,

I see the stars, I hear the rolling thunder

Thy power throughout the universe displayed

Then sings my soul! My Savior God to Thee

We all knew that the Spirit was moving. Maybe it was because the gospels tell us that Jesus was especially near to the lepers, the sinners, and the unclean and so we somehow knew that he was especially near to us in that space that served as their place of worship for over a century. Maybe it was looking down at the holes in the floor and imagining them singing the very words we were now singing:

And when I think, that God his Son not sparing

Sent him to die, I scarce can take it in

That on the cross my burden gladly bearing

A colony of people sent to this place against their will to die in hopeless despair, worshipping a God whose Son was sent willingly into a world of hopeless despair to bear the heaviest of burdens. A colony of people taken against their will from their homes and families and friends, people whose earthly “tents” were betraying them in the slow decay of flesh caused by a microscopic organism called mycobacterium leprae singing together:

When Christ shall come, with shout of acclamation

And take me home, what joy shall fill my heart