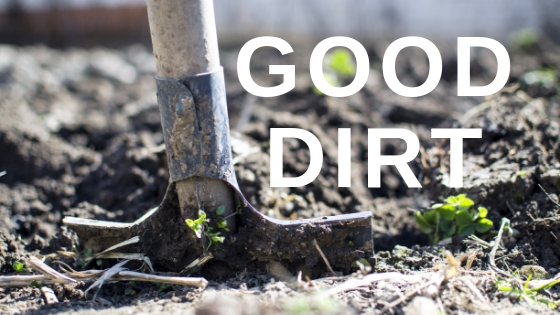 Posted by Tyler Kirkpatrick | 3/14/2019 “Then the LORD God formed a man from the dust of the ground…” Those of us who are familiar with the creation of Adam in Genesis 2 are probably familiar with that wording above (or something similar), but lately I’ve been drawn to the CEB translation of that verse: “the LORD God formed the human from the topsoil of the fertile land and blew life’s breath into his nostrils. The human came to life.” “From the topsoil of the fertile land.” It has often been pointed out that “Adam” (the Hebrew word often translated in our Bibles as “human” or “humanity”) essentially means something not far from “Dirtball,” and that human life is “from dust to dust” as we said last week on Ash Wednesday. It’s often associated with our sinful, corrupted nature, and there is a lot of truth there. Compared to the holy, eternal God, we are as dust. But it’s also worth noting that humanity is called “Dirt” before the Fall, so maybe there’s more to be gleaned here. I’ve had new light shed on this text recently by two favorite authors of mine: Wendell Berry and Eugene Peterson. Wendell Berry is a farmer… as well as a novelist, poet, essayist and cultural critic to boot, and he provides a unique agricultural perspective on stale words and concepts. We sometimes forget that scripture was written in a world dominated by farmers (note how many of Jesus’ parables are agrarian in nature). Eugene Peterson was a pastor, author, and Bible translator who said he read Wendell Berry’s writing on farming to learn how to be a pastor. Peterson remarked that simply replacing the word “farm” with “church” worked every time. He connected Berry’s observations about dirt as it relates to congregational life: “Wendell Berry has taught me a lot about topsoil. I had never paid attention to it before. I was amazed to find that this dirt under my feet that I treat like dirt is a treasure: millions of organisms constantly interacting, a constant cycle of death and resurrection, the source of most of the world’s food.”[1] “The LORD God formed the human from the topsoil of the fertile land”: we, the people of God are a treasure because we are treasured by our God. Created by God and called “good”; a community of organisms interacting, a constant cycle of death and resurrection, of births, weddings, baptisms, potlucks, joys, sorrows, service, mission, funerals. “The LORD God formed the human from the topsoil of the fertile land”: we are called to be the soil that is the source of the world’s most important food. If people do not discover the Bread of Life or the True Vine growing in the topsoil of the people of God, where will they find it in this world? “The LORD God formed the human from the topsoil of the fertile land”: we are as inconsequential as dirt when compared with the vastness of the eternal, holy God. But that holy God forms us and breathes breath into us, filling us with life abundant. [1] Peterson, Eugene. “Stumbling Across the Supernatural.” Christianity Today, July 1, 1991. Accessed January 9, 2019. https://www.christianitytoday.com/pastors/1991/summer/91l3082.html.