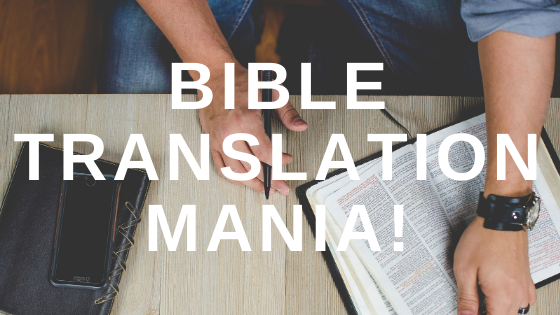 I continue to receive feedback and emails expressing well, opinions, about our new sanctuary Bibles. Many of you have already read the letter I wrote this fall outlining the process that was followed by Session. If you haven’t, read that before reading this blog post because this is in some ways an addendum to that letter. I’d like to consider here a couple of the more common objections I’ve heard to the new translation, and respond to those objections not so as to dismiss or diminish them, but to use them as a stepping stone to challenge us to read scripture in a more robust way.

Some Objections to the New Translation

Objection #1: “I have certain verses or phrases that are significant to me or that I have memorized and this translation sounds totally different!”

I really like this objection because I really like memorization and believe in its value and importance in the life of faith. It’s one reason I always use one of the same two Benedictions: I can remember my parents at significant moments in our lives quoting to us the Benediction our pastor used every Sunday. I hope you’ve come to really know and be steeped in those words of scripture that I say every single Sunday. On a similar note, as a kid who grew up in the church, I was “encouraged” (i.e., bribed by candy) to memorize scripture. My motives may not have been perfect or pure when I memorized those verses, but I’m amazed at how many of them have come bouncing back into my mind unexpectedly in moments where I was in distress or rejoicing, needing encouragement or exhortation. So, I’m empathetic to this objection. Certain words and phrases stick with us, and that’s really good. At the same time…

A response to the objection: First off, no one is mandating that you now memorize those dear and beloved verses in the new version! Nor are we mandating that everyone in the church go purchase the CEB. Many people bring their own Bibles (or use an app on their phone) which differ now from the Bibles we have or differed before from the Bibles we had in the Sanctuary. Please, keep doing so!

Secondly, an analogy: Mount Rainier, when viewed from the North or East or South or West looks almost like four entirely different mountains. The East side of the mountain is one long, clean slab of snow and ice comprised primarily of the massive Emmons Glacier. The North side of the mountain is rocky and rugged; cut down the middle by the treacherous Liberty Ridge and adorned with the Willis Wall. Of course, it’s all the same mountain. Because translations are, by definition, not the original text themselves, I think they can be helpful in guiding us to see “the mountain” (that is, scripture) from different angles. I still have my preferred vantagepoint for looking at Mount Rainier (it’s the Sunrise side, because that’s the side my family grew up camping and hiking at), but a trip to the other side of the mountain to view it from a different angle can be helpful in deepening my understanding of it and connection to it. By all means, hold on to your preferred translation of scripture, but don’t be threatened by new or different ones. Instead, see them as resources available to you and allow them to deepen your understanding of scripture and maybe even ask different questions. In fact, I wrote about one way the CEB challenged me to see a text with which I was very familiar in a new way in a blog post last year.

Objection #2: “I don’t like the translation/they translated this verse incorrectly/badly”

I am, admittedly, less empathetic to this objection. There have been more than a handful of times in the past few months where someone has brought some form of this objection to me as a sort of incontrovertible proof that the CEB is an inferior translation. Without fail, when I’ve opened up to the Hebrew or Greek, it has been almost immediately obvious why the translation team made the decision that they did. To be clear, it doesn’t mean I always agree with their translation choice, but it does mean that I don’t get to immediately dismiss out-of-hand their translation. I have to wrestle with why they made the choice they did. Next time you come across a translation in the CEB that you don’t like, instead of immediately saying, “Ah, this is another reason this is a bad translation!” I’d challenge you to do the following:

I personally don’t have one go to, preferred translation that I stand by or champion. I haven’t for a long time. While I certainly had a few translations that I would not have wanted us to adopt, I really felt the decision should finally be up to Session (with some guidance from myself as well as the insights of our “clergy collegium”). There are things that I don’t like about the CEB, just as there are things I don’t like about the NIV and NRSV and every other translation. I have, nevertheless, found the CEB to be helpful in my study and engagement with scripture. The fact is, oftentimes five words are needed to translate one word, but the teams have to make a choice. They have to choose one word. I’m not a champion of any one translation of the Bible, but I am a champion of thoughtful engagement with scripture, and simply dismissing a translation because “I don’t like it” or “It’s not what I’m used to” doesn’t exactly fit under the umbrella of thoughtful engagement. Above all, I want us to not lose sight of the fact that we come to scripture to be formed and transformed by it. I am resolute in my belief that the Holy Spirit can and does speak through many translations, provided that translation was done faithfully, prayerfully, and humbly. My prayer for us as a church is that even if we don’t like a particular translation, we will be staunch in our refusal to let that be a stumbling block or distraction that prevents us from coming to the Word of God and being transformed and renewed by it.

[1] What about the King James Version?! I think the KJV may be unparalleled in the beauty of its language, and I read it for that reason. It has a lot of problems as a translation, however. That is nothing against its translators, but more of an observation that when it was translated over 400 years ago, they did not have nearly the same volume or quality of ancient manuscripts available to us today (chief among them, the Dead Sea Scrolls, discovered in the 1940s).

If this blog post is an addendum to my letter, then this is an appendix to the addendum (or is it an addendum to the appendix?). Anyway, I thought I would include some of the comments from our guild of retired pastors that came in when we were soliciting their opinions on translation. I won’t identify which one said which in case they’d like their thoughts to remain anonymous (though they are welcome to claim their own comments!):

“[Y]our timing is amazing… I was sputtering ‘I hate translation!!!!! (Insert stronger words if necessary)” … sat down and read your email. I was working on my sermon for next week… and totally frustrated with the translations… CONCLUSION: I think the church pew bibles should be in Hebrew and Greek. Which version?… The reality is that the vast majority of those that actually use their Bibles like in Bible studies will continue with their present translation and put up with the differences. Also, many of us are using sites like Biblegateway.com don’t really care which version.”

I’ve been leaning on the Common English Bible for most of my personal Bible study, mainly because I enjoy how it surprises me by its English word choices in translation. The JPS has become a delightful supplement for OT studies, though.

In these times, I think adult Christians should be challenged to think critically and to be humbled by the breadth and ambiguity in Scripture. Reformed, or not.

I agree… Put the Hebrew and Greek in the pews, too!!

“I like the CEB best of those… It is much clearer and less strained than the NRSV.

Even though I studied with Dr. Everett Harrison who translated Thessalonians in NIV, I think the NIV did the unthinkable in my opinion when it translated Ecclesiastes ‘vanity of vanities’ as ‘meaningless’ rather than ‘temporary’ or ‘fleeting.” That has always bothered me.”