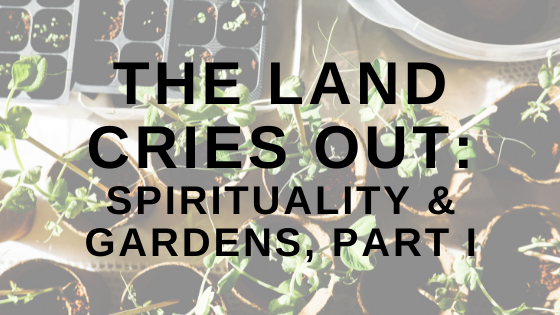 In a series of blog posts, several of us will be exploring the question of why a community garden makes good sense for a church, and I’ll be leading us off with a series of three posts. For many of us, the reasons for a community garden are self-evident. But whether or not we need persuasion, I think we’ll find the reasons are even more extensive than we may have realized. I’ll leave the expertise about gardening to more capable minds than mine, but in this three-part series, I’ll be looking at what I’m calling the “spiritual theology of gardening.” In today’s post, I want to explore how a community garden can deepen our understanding and love of scripture.

The Land Cries Out

Ellen Davis has been one of the most helpful guides I’ve found in interpreting the Old Testament for a myriad of reasons, but one of the primary ones is her emphasis on an agrarian reading of scripture. Anyone who has read more than a few pages of the Bible can readily see the agrarian perspective of its writers: agricultural imagery and symbolism abound in scripture, whether that be unruly and obedient vineyards or vineyardists, or mustard-seed faith and parables about soil. I often assumed this was merely incidental. That is to say, it was simply because the biblical writers were using images that would have been familiar to their audience in the same way we might use illustrations about computers or cars, and of course that is true, but Davis has pushed me to go a little further in my thinking.

She describes a moment many years ago when she was meeting with her teaching assistant to prepare the final exam for an Old Testament course she was teaching. The assistant asked her if she was going to include a question about the land.

Because you talk about it all the time, her assistant answered.

She writes of her own journey to discovery:

Reading the Bible is my line of work, yet for years I hardly noticed all this detailed attention to [the land and to] food supply… And once I did notice, I still had no idea what to make of it—and the scholarly literature was of no real help. I now realize that this general cluelessness about food sources among modern professional readers of the Bible points to a deep and worrisome difference between a modern cultural mindset and the culture that all the biblical writers represent. The difference comes down to this: for them, eating and agriculture have to do with God, and for us they do not… We might bless the food on our plates, but rarely does that provoke any serious thought about the mystery that underlies it. For the biblical writers, however, God’s provision of food is a key mystery and a core theological concern; eating is at the heart of our relationship with God and all that God has made.[1]

I hope in our current Mark sermon series we’ve done an adequate job of highlighting the fact that God and humanity are not the only characters in the gospel. Jesus enters into territory occupied by “powers and principalities” who are not neutral but are in fact demonic forces actively opposed to the ways of God. In the Old Testament, I’m not sure it would be a stretch to say that for the biblical writers, the land is nearly viewed as a character (as a starting point, see Genesis 4:10, 12; Jeremiah 4:28, 12:4, 23:10 and Hosea 4:3). Davis again:

Rarely does one read through two or three successive chapters [of the Old Testament] without seeing some reference to the land or to Zion, the city that is ideologically speaking the source of its fertility. Beginning with the first chapter of Genesis, there is no extensive exploration of the relationship between God and humanity that does not factor the land and its fertility into that relationship. Overall, from a biblical perspective, the sustained fertility and habitability of the earth, or more particularly of the land of Israel, is the best index of the health of the covenant relationship. When humanity, or the people Israel, is disobedient, thorns and briars abound; rain is withheld, the land languishes and mourns. Conversely, the most extravagant poetic images of loveliness—in the Prophets, the Psalms, and the Song of Songs—all show a land lush with growth, together with a people living in (or restored to) righteousness and full intimacy with God.”[2]

Biblical wisdom literature (Proverbs, Ecclesiastes, Job) is often conceptualized of as little tidbits of advice or perhaps little commands. But it’s probably more accurate to see them as ways of instruction about how to live rightly in God’s creation, cultivated by sages who have learned hard lessons firsthand. Wisdom literature stems from a belief that God has created and ordered the world in a certain way, and when living with the grain of God’s creation (which is what wisdom literature tries to teach us to do), we experience life (life abundant, life to the full), and when going against the grain of creation in wickedness or selfishness, we experience death or deadness. But again, this extends beyond mere morality for the biblical writers (e.g., I have a clear conscience and more healthy relationships, so I feel better). It also relates to the land and whether the land is flourishing and, of course, the people living in that land.

Wendell Berry put it this way:

(Of course, “spirituality” and good use of the land are not separate practices, which is partly Berry’s point.)

Anyone who has spent even a little time tending to a garden will know that caring for creation comes with a deep sense of satisfaction. I believe that is because in those moments we are going with the grain of how God created the world, and in fact one of the first vocations given to the first humans way back in Genesis 2. But this is to get ahead of myself, for that is to look at how a community garden can grow us spiritually as individuals and as a community. And that will be the subject of tomorrow’s post.

3 Replies to “The Land Cries Out: Spirituality & Gardens, Part I”