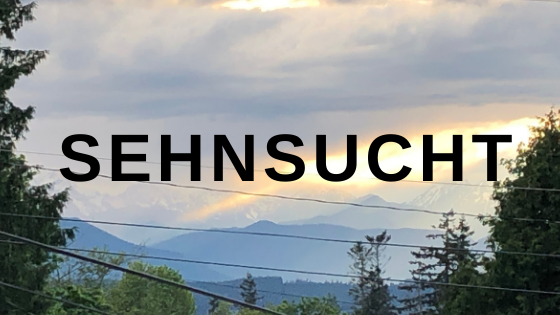 There are better pictures of the Olympic Mountains out there. This one has powerlines in it, but that’s kind of the point. It’s a picture I took on a recent walk. It’s what’s available to me now.

One of the joys for Kitsap County residents is our proximity to, and many vantage points of the jagged, snow-capped (at least this time of year) Olympic Mountains rising up dramatically above Hood Canal. I’ve found over this past month I’ve lifted my eyes up to those hills often with longing. Longing for the fresh air of old growth cedar and high alpine wildflower meadows and lakes. But, like so much else in our world, the National Parks have been closed (though perhaps are opening soon!), preventing me from inhabiting those spaces I can see for now only from afar.

I’m reminded in those moments of a German word that C.S. Lewis loved: sehnsucht, that is, an experience of “bittersweet longing.” As professor Forrest Baird defined the term it’s an experience where “the want is acute and painful, yet the mere wanting is felt to be somehow a delight.”[1]

“the want is acute and painful, yet the mere wanting is felt to be somehow a delight.”

In his own life, Lewis said he first experienced this sensation as a young boy when his brother brought in a tiny toy garden he’d put together with some moss and twigs. Lewis suddenly had a deep desire to become tiny and to inhabit the lushness of the garden. Or, similarly, “every day there were what we called ‘the Green Hills’; that is, the low line of the Castlereagh Hills which we saw from the nursery windows. They were not very far off but they were, to children, quite unattainable.”[2]

Though the want is acute and painful… the mere wanting is somehow a delight.

And sometimes the desire is more delightful—or at least “differently delightful”—than the satisfaction of that desire.

My family’s go-to campground when I was a kid was the White River Campground in Mount Rainier National Park, so we hiked all over those trails on the eastern slopes of the mountain. My dad would help me point the large telescopes at the Sunrise Visitor Center onto the glaciers where I could see climbers that looked like tiny ants even with the help of a magnified lens. I remember as a kid looking up at the upper icy slopes of the Emmons Glacier towards the summit with a longing—a delightful desire—to be there.

Now, I have been there, having summitted Rainier three times (a puny number compared with my predecessor Lee Riley’s 25 times, and many other CKPC climbers who have also been up a fair bit). Two of those times I summitted by that very same route I watched as a young boy, now myself one of those little ant-climbers. In many ways, the satisfaction of that sehnsucht desire of my boyhood was extraordinarily fulfilling; those Rainier climbs were exhilarating and truly wonderful; memories that I wouldn’t trade for almost anything.

In other ways, though, the satisfaction of that desire was less than the desire itself. On one particular climb I was probably the coldest I have ever been in my life as we got caught in a miserable rain/snow and extremely high winds. I was the most exhausted I’ve been on one particular climb. And I was more sunburnt than I’ve ever been on another. I can tell you that none of those experiences had factored into my boyhood sehnsucht longing and imagining of what it would be like to be there.

We are in a period of longing. Longing for hugs, longing for picnics with friends or board games at a local brewery, longing to go to places we are prohibited from going to and much of that is simply painful, bitter longing. In bitterness, it’s appropriate to practice the tradition that has been handed down to us from long ago: lament. It is good and right for us to lament, and to help others and give them the space to do the same in this time.

But might there also be a bittersweetness somewhere in our longing? Or even a sweetness? C.S. Lewis said our desires reveal things about how we were created. Our desire for hugs reveals how we were created for community, connection, and intimacy. Our hunger reveals we are creatures who need food and nourishment. (And, Lewis says, our sense that “time flies” or our surprise at “how much so-and-so has grown!” reveals we are creatures not created for time, but for eternity.)

The satisfaction of the longings and desires we currently have in this strange season of staying at home will be a wonderful thing. And yet in some ways the satisfaction won’t fully live up to the desires themselves, at least not in the long run. As Annie Dillard put it in her description of the beautiful majesty of the view from the cabin in the San Juans from which she wrote one of her books: “It was very grand. But you get used to it.”[3] Schedules may well get overcrowded and busy again, conflicts will arise with friends and family. In those Olympic Mountain alpine meadows, I’m sure I will get bitten by mosquitos or flies. The satisfaction of the desire to finally get a view from the summit will be satisfying; it will be beautiful and other-worldly, but it will also be bitter cold and we’ll still get sunburnt from time to time.

I’m not trying to be a wet blanket here, I’m trying to be a pastor (hopefully those aren’t the same thing too often!). My hope is that we might see God in our very desires and longings right now. My hope is that our desires will point us not only to the things that are good—very good!—that we will attain soon enough and will indeed satisfy, but also that they might point us to deeper desires, to the “far off country,” the heavenly country. The longing is very painful and bitter some days. We lament that. But sometimes it is bittersweet. Sometimes it is reminding us of how much we love and desire something, some place, or someone we’ve taken for granted. Sometimes God is using our very desire to reveal something to us about how we were created, and to reveal something about a future we are destined for which is only hinted at in our sweetest sehnsucht longings.

[1] Forrest Baird. Lecture given at Whitworth University in Fall 2010.

[2] C.S. Lewis, Surprised by Joy. Since I am working/writing from home in this season, I don’t have all of my books with me, which means I can’t easily cite page numbers as I normally would.